February 2, 1948, Monday, began what at first was the group of the master Kandido Pujana, what later would be baptized like GOIZALDI. The first action of the group took place April 25, 1948. 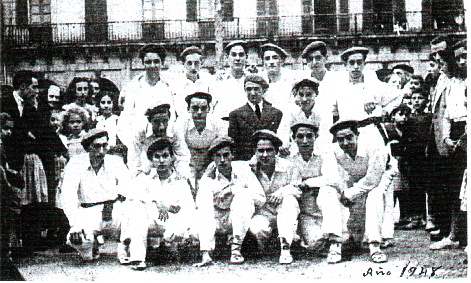 One year after, in 1949, the first foreign performance of the recently created group was produced. It went in the city of Pau (France) together with ‘Orfeón de los Buenos Amigos’ of Irun, in an agricultural fair.

In 1951, three years after their creation, the youths that danced to the orders of the master Pujana decided that the hour had arrived of putting name to the group. The proposal of Jose Ignacio Montes Astigarraga was accepted, the name of “GOIZALDI” (daybreak).

This year 1951 was important in the history of the group. In October the female group was created, in this way was prompted the activities of the group. As of that date the performances multiplied.

The first document that is conserved in which the name “GOIZALDI” is mentioned dates of 1953. May 3, that year, the minutes of the Board of directors relating to the performance that should be developed in Bilbo did reference to the following thing:

The Group, in case of contract, it will be appointed in the newpapers, radio, mural announcements, etc, with the following name: just as follows: THE BASQUE BALLETS of SAN SEBASTIAN “GOIZALDI”, disciples of the Master Pujana.